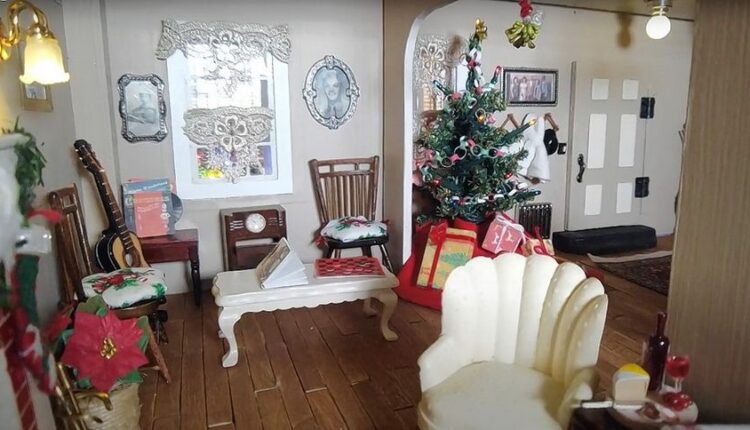 Pandemic brings us ‘Honey, I shrunk the Holiday Housewalk’

Note: This column has been updated to correct the spelling of Judy Hasenjaeger’s name.

With the 2020 pandemic sinking the Mount Prospect Historical Society’s 33rd annual Holiday Housewalk, the group is leveraging a new idea and toys from the past to save their biggest fundraiser of the year.

“It was my first idea right outside the door,” says Emily Dattilo, 27, a native of Mount Prospect, who was hired as the company’s new director in July. Forced to ditch the idea of ​​hordes of strangers paying $ 28 to tour historically significant houses in the village in December, she turned to the Society’s collection of antique dollhouses.

“What if we took a tour of the dolls houses?” She thought.

“Virtual tours have become the norm,” says Ed Johnson, 42, a 14-year-old board member who happens to be a professional videographer. His DroNation manufacturing company conducts virtual property tours for real estate agents. But how do you make a “passage” through a doll’s house?

“I have this tiny little camera,” Johnson says of his OSMO pocket video camera. “It is literally as big as the dolls in the dollhouses. I can get different angles than what a human can see. It is as if you have shrunk and little what you have done.”

Johnson places the camera in any room in a doll’s house and can use his cell phone to control the camera’s gimbal and change the view as if he were turning his head.

The view of the only private dollhouse among the six on this year’s tour is an original owner Judy Hasenjaeger had never considered when she was a 10-year-old girl while visiting Chicago in 1945 with parents Joe and Alice Connelly. Got bug. The elaborate Fairy Castle dollhouse, designed by actress Colleen Moore and now a permanent attraction at the Museum of Science and Industry, was displayed in the windows of Marshall Field, leading to a dollhouse under the family tree.

“I had five good years,” says Hasenjaeger, who was an only child. “Then it stayed packed until my girls were 10 and played with it.” 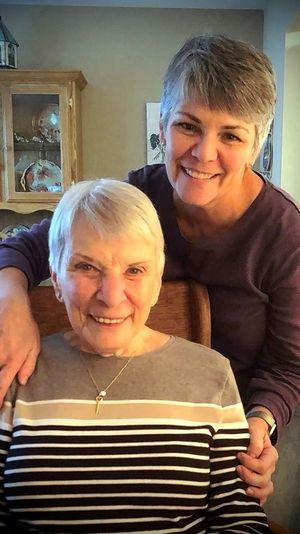 The dollhouse Judy Hasenjaeger, 85, who was played with as a girl in 1945, was put into storage until her daughters, including Julie Michalik, were old enough to play with. The dollhouse is now used by a fourth generation of children.
– Courtesy of the Mount Prospect Historical Society

She and her husband Bob had daughters Julie and Nancy play with the dollhouse and sometimes fended off attacks by GI Joe on her brother John until they grew out and packed it away. When Julie and Joel Michalik’s daughter Magen turned 10, the house got out of hand until Magen got older and the house was put into storage. Now Magen Pignataro’s daughters, Holly (12) and Leah (9), can occupy the dollhouse.

As with many large houses in Mount Prospect, every generation has made changes such as: For example, paint the walls a different color, add carpets or update the furniture, says Julie Michalik. The 1924 English Tudor house where she and her husband live was part of the Holiday Housewalk in 2018 and retains its original appearance. The couple worked to restore the dollhouse to how it looked 75 years ago. 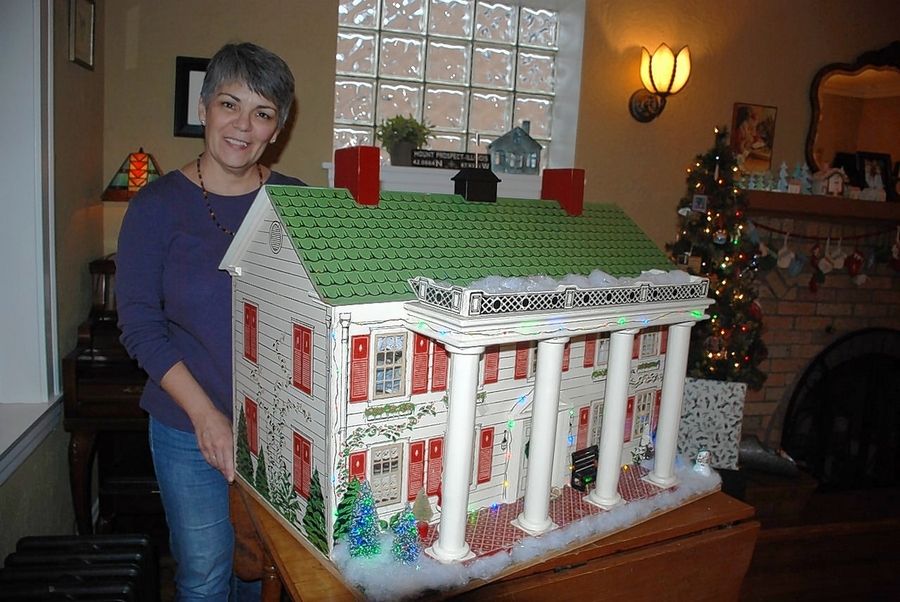 “I learned more about miniaturists than I would have thought,” says Julie Michalik.

She made tiny copies of photos of her grandparents and parents hanging over the dollhouse’s fireplace. A plate of tiny biscuits awaits Santa Claus, a desk from the 1940s with an old telephone and elaborate Christmas decorations, including a Christmas tree with a tiny paper chain that took Michalik eight hours to make.

Another dollhouse on the virtual tour is Atwood Manor, built by the late Margie Atwood as a replica of the Mount Prospect house where she has lived since 1942. It includes an ornate staircase, wooden moldings, wallpaper, electric lighting, and a hand-sewn pink silk bedspread.

A doll’s house built in 1932 has lots of wood including an unusual red, Art Deco style living room.

The 21st Century House, donated by Shirley and Bud Budris in 2000, was not intended as a toy, but as a work of art. 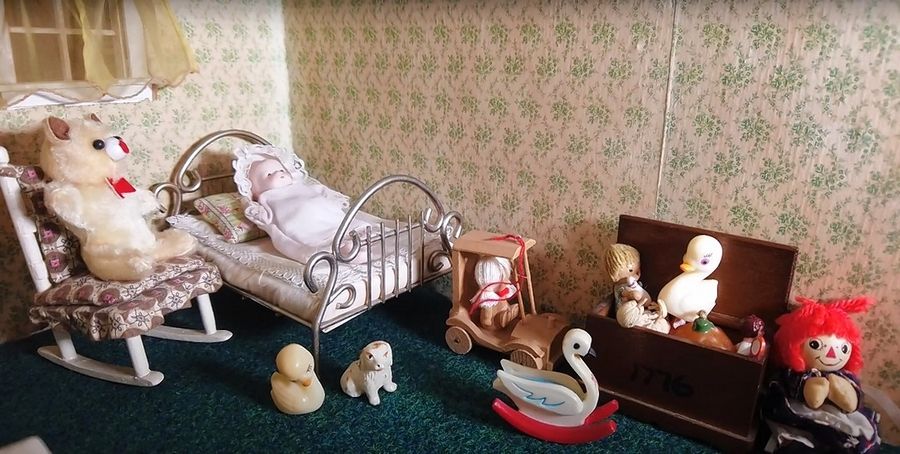 Donated by the Walgreens on the southeast corner of Kensington and Wolf Streets, the Chalet House is a stylish, colorful mid-20th century toy that required parents to assemble the fiberboard house using the nuts and bolts provided.

The oldest house in the collection is the Edwardian Eclectic Dollhouse, built from mahogany in 1905 by Charles Semft as a Christmas present for his granddaughter Erns Keller and made by hand. But it also has a twist from the 1970s, with rainbow wallpapers and dolls and accessories from Mattel’s “The Sunshine Family” dollhouse.

“The Sunshine Family left the last child who played with it,” says Dattilo. “That’s the cool thing about it. The dollhouses span the century. The dollhouses are very different.”

The tour is sponsored by local brokers Bill Farrell of ReMax Suburban, Jim Regan of ReMax Suburban, Judith Muniz of Habloft, Laura Parisi and Kelly Janowiak of @Properties, Mary O’Malley of @Properties, and Tom and Mary Zander of Picket Fence Realty . Johnson shot all of the footage and spent an additional 20 hours editing it into a show that incorporates old photos and stories about the time the houses were built and their unique features. 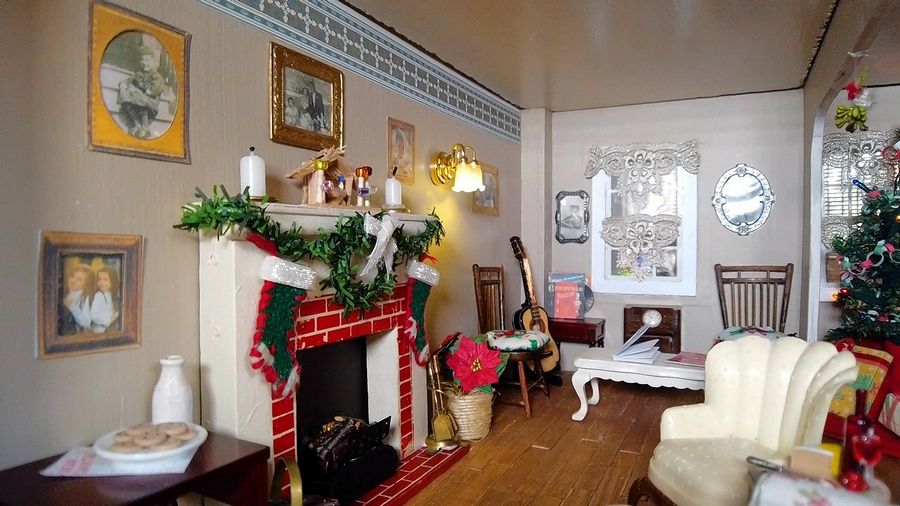 For $ 10, a household can view the dolls’ houses online from December 15 to February 15. Information and tickets can be found on the mtphist.org website.

It’s a tour that could prove to be as fascinating as the regular home tours, especially given the fact that you can go anywhere without wearing a mask, standing in line, or battling the cold and nasty weather. Seeing the video tour of the dollhouse she played with 75 years ago is a thrill for Hasenjaeger, who still lives in Mount Prospect with her husband.

“I really never thought I’d see it again,” she says. “I hope it goes on for more generations. We love it.”