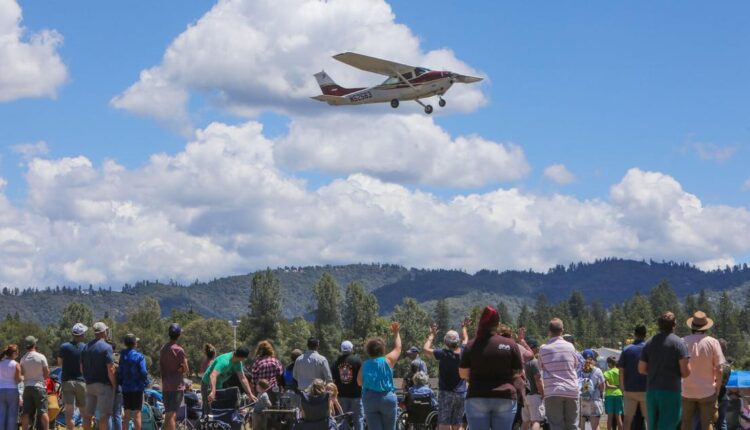 The Father’s Day Fly-In at Columbia Airport returned Saturday and Sunday after a two-year absence due to the pandemic. The free, family-friendly event was well attended, with plenty to see and do.

Free hot air balloon rides were offered from 8 am to 11 am, again at dusk to 9 pm, courtesy of ReMax and Kamps Propane. As folks walked about the event, they were enveloped in the aroma of freshly popped kettle corn wafting through the air and the joyful screams of children enjoying two bounce houses.

The air space closed from noon to 3 pm, for the event but, according to county Airport Manager Benedict Stuth, Cal Fire and PHI’s medical helicopter were still on call the entire time.

“If the phone rings, we’re gonna leave you,” he said.

Krystall Johanson, with Yosemite Flights out of Pine Mountain Lake, signed people up for flights in a Cessna 404 piloted by her husband, Jason, who has attended the Father’s Day Fly-In for 15 years. Their 16-year-old son, Jonas, is the co-pilot and flew from their home to Columbia Airport by himself, in a three-seater Cessna 182.

The Johansons offered a 20-minute flight in the nine-passenger Cessna 404 Titan, where every seat is a window seat, with aerial views of Columbia, Jamestown, Sonora, Table Mountain and New Melones Reservoir.

“It was really fun to see the quarry and the lakes from the air,” Ben Kray, 20, of Santa Barbara, who attended the event with his father, Bryan, a pilot with the Concord Flying Club, and went up for a ride in a Cessna 404.

A colorful fleet of classic cars and models as were on display with their proud owners waiting in the wings to accept compliments and answer any questions.

Mike Schulze, 64, of Hillmar ,and a member of the Sonora As brought his 1931 Ford Model A Cabriolet. A large stuffed animal chicken with goggles sat in the front passenger seat. Schulze said the chicken rides in the passenger seat when his wife isn’t around.

A group of men sat near a 1940 Cadillac Fleetwood 60 Special with dual side mounts. Its owner, Charlie Morgan, 68, of Sonora, said he and the guys were friends for 50 years and that they used to cruise the strip in San Leandro.

Adults and children were given the opportunity to check out a Bell 212 HP helicopter owned by pilot Travis Harrold, of Sonora and Cottage Grove, Oregon. His company, Intermountain Helicopters, is a private company working to deliver firefighters to battle fires as well as delivering construction materials.

An all-you-can-eat barbecue dinner of barrel smoked tri-tip, barrel smoked chicken, boneless ribs and jalapeno macaroni and cheese was served up by The Sierra’s Table at 5 pm, on Saturday with outdoor entertainment. Hot air balloon rides, which were scheduled to resume at 8:30 pm, were canceled due to wind. A night time movie, “Planes: Fire and Rescue” was shown on the grassy area near the runway.