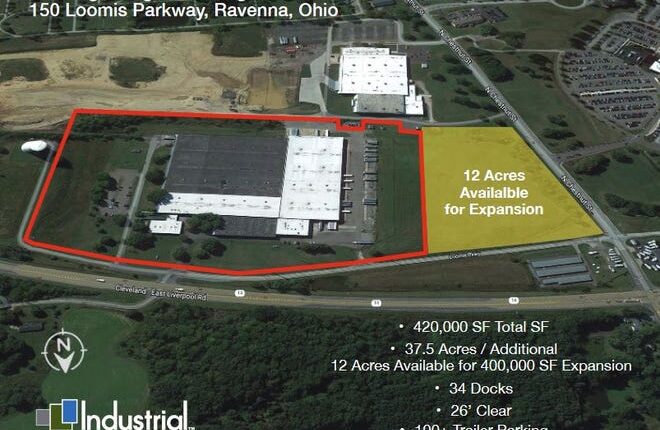 A large industrial building in Portage County is being bought from the same commercial real estate development firm that is renovating Chapel Hill Mall and the former Geauga Lake property.

Solon’s commercial real estate announced Monday that it was purchasing GE Lighting’s 420,500 square foot warehouse / distribution building on 37.5 acres at 150 Loomis Parkway in Ravenna. The land is on the north side of the city and has direct access to State Route 14.

General Electric announced in September the closure of the distribution center, which employed around 40 people. According to Portage County’s real estate records, ownership of the property was transferred to a company called 150 Loomis LLC last September for $ zero.

The estimated value of the property is $ 4.6 million.

The sale to ICP takes place only a few years after the closure of the adjacent lamp factory with an area of ​​172,000 square meters, in which around 160 people were employed in 2016. The factory, which closed in 2014, had been in operation since the early 1960s and had already employed around 400 workers at its peak.

In a press release, ICP chief operating officer Chris Salata said that GE employees will be staying on the Loomis Parkway property “for a limited time”, adding that approximately 150,000 square feet of warehouse and distribution space is immediately available.

The building has more than 30 docks, more than 100 trailer parking spaces and rail transport, according to the press release.

“We also have an additional 12 acres under contract to adjoin this property that could support an expansion of the building to 800,000 square feet,” said Salata.

According to Portage County’s real estate records, the adjacent 12 acres are still owned by General Electric Co. and are valued at just over $ 250,000.

“As with all of our projects, ICP will make significant improvements to the building. So this will be a sizeable, modernized block of space that was previously unavailable. Given the growing demand for logistics facilities and the record depth in the industry, we assume we will in this The region will quickly find a new or expanding tenant. There is a lot of pent-up demand in this sector, “said Salata.

“Our improvements include improvements to indoor and outdoor lighting, a modernized sprinkler system, paving and interior renovations that add to the attractiveness of the building,” he said in the press release.

ICP recently purchased 377 acres of the former Geauga Lake property in Bainbridge Township. The development company is actively marketing the site to retailers, restaurants, residential and other commercial users and is planning a menard on the property at State Route 43.