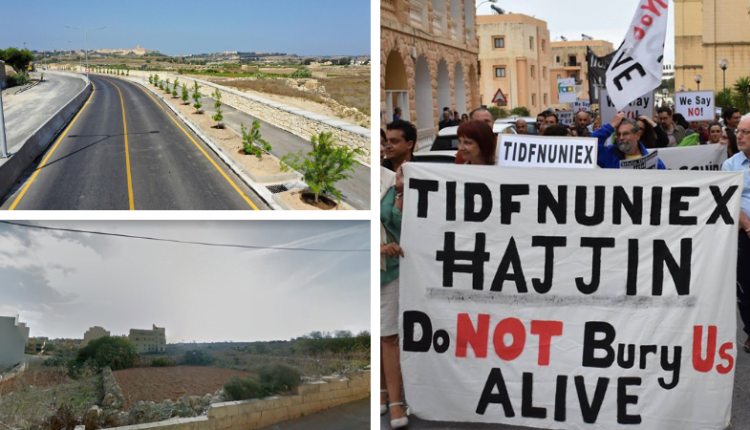 In recent years, local residents and environmental NGOs have put pressure on the planning authority to reject applications that violate planning laws, threaten urban and rural environments, and pose a risk of community destruction.

In the last four months alone, there have been at least 11 different projects that raised significant objections, with many cases sometimes taking years to resolve. An intersection in Burmarrad, another LIDL in Żebbuġ and a planning control application in Rabat, Gozo that wanted to open up a quiet road for development are just a few that have caught people’s attention since the beginning of the year.

Yet despite the increased efforts and organization of both local residents and NGOs in conflicting projects in their locations, there has been no discernible change in the way some developers openly disregard regulations or use the PA’s loopholes to find ways bypassing the rules.

The constant objections of citizens, community representatives and organizations who want to protect the public space from overdevelopment are often ignored by the authorities. The three major projects listed below are among the most controversial that have been approved, are in the process of approval, or are nearing completion despite significant and widespread public opposition.

According to Transport Minister Ian Borg, one of the biggest hot spots for the environmental lobby in Malta was the Central Link project, which should be completed by October. The project cost the taxpayer 55 million euros and resulted in the uprooting of around 500 trees and the loss of 48,000 square meters of arable land.

The project was first flagged in October 2017 when farmers were warned about taking over their land. While Infrastructure Malta was running a PR blitz to convince voters of the benefits of the project, the agency had kept the details of studies such as the cost-benefit analysis of the project under wraps and disclosed specific conclusions without presenting the methodology.

Borg had also claimed that the project did not require a traffic assessment, although the project’s key requirement was to reduce traffic times in the area by 50%.

Despite a protest rally with more than 1,000 participants, the project was approved in July 2019. A protracted legal battle in which appellants had raised € 20,000 to appeal against the green light for the project failed the following year after both the Environmental Planning Review Tribunal and Court of Appeal rejected their arguments against the project.

The appeals court had not even been given time to draw its conclusions before starting work on the project. While the court had reached its conclusions in February of last year, work began as early as January, making Central Link a de facto a fait accompli.

Pembroke Towers of the DB Group

After the land on which the former Institute for Tourism Studies stood was handed over to the DB Group in a controversial, 99-year concession for only 15 million euros in February 2017, residents and environmental activists of Pembroke took to the streets to oppose Protesting the concession will result in the construction of a 37-story tower and a 17-story hotel.

The project, which spans 24,000 square meters of prime public land, immediately sparked controversy, not only because of the massive scale of the project and the amount of commercialization just outside the gates of a predominantly residential area, but also because real estate agents were ahead of any kind of sale of Apartments had started permits had been issued by the planning authority.

In a heated, six-hour meeting in September 2018, the planning committee approved DB’s motion with ten yes and four no votes, despite 4,500 objections from the population and the cumulative pressure of the local councils of Pembroke, St. Julians and Swieqi.

When the appellants appealed to the Environmental Planning and Review Court, the appeal was upheld and the project returned to the drawing board after the conflict of interest of Matthew Pace, board member of the planning agency, who also works as a franchisee for real estate agency Remax, which is also involved in the sale of apartments for the Project was involved.

Undeterred by public opposition to the project, DB Group revised its plans and launched a PR flash to redouble its efforts to develop the website. Unimpressed by the PR and the group’s re-scaled plans, opposition to the project continued. Activists raised another € 20,000 to fight the second version of the project, which was also approved by the planning authority’s board after nearly half of the board members refused to prevent themselves from making a last-minute decision.

Plans for a 125 apartment block just 300 meters from the Gozit coast in Sannat are also met with opposition from environmental NGOs. Gozo in particular is currently under siege by mega-planning projects and its mayors, increasingly concerned about the island’s overdevelopment, have now come together to curb rampant development.

One of the main driving forces behind developments on Gozo is construction magnate Joseph Portelli, who reportedly split his 125 apartment block in Sannat among three of his employees in order to bypass the environmental impact assessments for the permits.

The environmental NGO Moviment Graffitti noted that two of the three permits submitted, one of which was approved before anyone had time to object, would also protrude onto the ODZ’s land and destroy the character of the village in general.

Despite objections from the Environment and Resource Board as well as Graffitti, including violations of building height restrictions and threats to local flora and fauna, the Environmental Planning and Review Court approved work on one of the applications to begin while the appeals were being negotiated, including one The application to cease work submitted by the NGO Din L-Art Ħelwa was ignored.

The next session of this call will be on September 28th. Meanwhile, Graffitti said that the “tried and tested tactics” of Portelli and his staff would likely result in the project being completed before the next meeting.