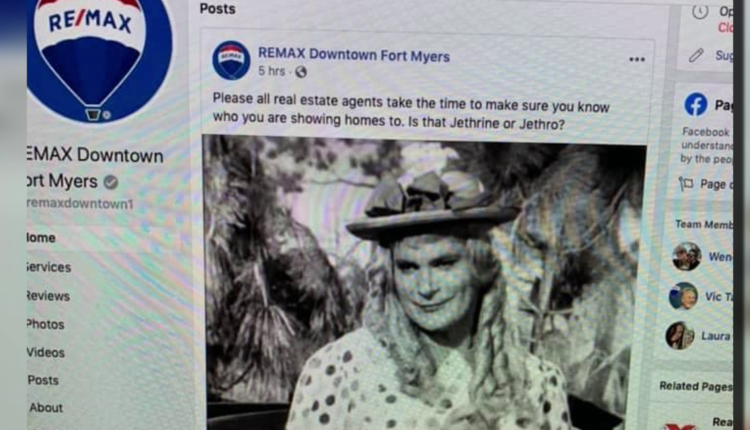 Is that a tasteless joke or hate speech disguised as humor?

A real estate agent in southwest Florida posted a few days ago and said, “Take the time to make sure you know who you are showing houses to. Is that Jethrine or Jethro? “The text was accompanied by an actor in drag.

On Thursday, the Post is still causing a lot of controversy despite being removed.

The post was referring to the show The Beverly Hillbillies – a form of entertainment. However, many LGBTQ advocates say the post doesn’t fall into that category.

Not long after, another broker from the same office took to Instagram likening a deal to “a transsexual fight with a hermaphrodite for a mistress,” a reference on the Jerry Springer Show.

Warren is a broker with another Remax group in Cape Coral.

“The context of the actual post was just inappropriate,” he said.

We tried to interview the agents behind these posts in downtown Remax on First Street.

One of the brokers said they had no comment and the situation had been turned over to their legal team.

The Facebook page has since been deleted, but before that they partially posted an apology reading:

My intention with the Post was more to do with broker security as many brokers are currently being attacked during demonstrations.

“The post that went up and the kind of words that went through it reinforce those negative stereotypes of transgender people as predators,” said Jason Boeckman, a member of the SWFL Pride Board.

He says that’s why the festival was started.

“This is an opportunity to learn and educate us humans about LGBT people,” Boeckman said.

He says there has been a lot of anti-transgender posts on social media since last month’s murder of Bee Love – a colored trans woman in Clewiston.

Pride organizers say they will have a moment of silence in their honor during the event on Saturday.

admin 50 mins ago
Marketing for Agents